In URSULA VON RYDINGSVARD: INTO HER OWN filmmaker Daniel Traub nimbly illuminates the fascinating journey of Ursula von Rydingsvard – from her 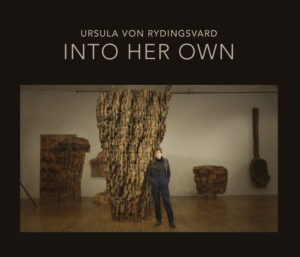 difficult early life in a family of nine emigrating to the US after five years in post-WWII German Displaced Persons camps, a traumatic first marriage, her arrival in 1970s New York to establish herself as an artist, and the staggering, triumphant body of work she subsequently produced. Von Rydingsvard is one of the few women in the world working in monumental sculpture. Von Rydingsvard’s work has been featured in the Venice Biennale and is

held in the collections of some of the world’s great museums, including New York’s =Museum of Modern Art, the Art Institute of Chicago, and the San Francisco Museum of Modern Art. But she may be best-known for the stunning “Scientia” at M.I.T. which evokes the power of nature and the firing of brain synapses. imposing pieces painstakingly crafted with complex surfaces. URSULA VON RYDINGSVARD: INTO HER OWN, goes behind the scenes with von Rydingsvard, as she and her

collaborators – cutters, metalsmiths, and others – produce new work, including challenging commissions in copper and bronze. But the film also delves into the artist’s personal life, and how it has shaped her work. In conversations with curators, patrons, family, and fellow artists, we come to know von Rydingsvard as a driven but compassionate sculptor with a deep commitment to her art and the world around her.  Director Daniel Traub joins us to talk about von Rydingsvard’s creative process and how the materials she uses to create her complex and challenging sculptures influence her artistic approach.

For news and updates go to: intoherownfilm.com

About the filmmaker: DANIEL TRAUB  Director / Producer / Cinematographer is a New York-based filmmaker and photographer. He lived in China from 1998 to 2007, working as cinematographer on documentary films for various networks and production companies, including PBS, German television ZDF and Arte. More recently, Traub directed the feature-length Barefoot Artist about Lily Yeh and her collaborative artworks in war-torn communities and Xu Bing: Phoenix about the condition of Chinese migrant laborers. Traub’s photographs have been exhibited internationally, including solo exhibitions at the Catherine Edelman Gallery in Chicago, Slought Foundation in Philadelphia and the Lianzhou Foto Festival in China. His work can be found in public and private collections, such as The Margulies Collection at the Warehouse and San Francisco Museum of Modern Art.

“A welcome cinematic account of her work.” – Glenn Kenny, The New York Times

“This compelling documentary portrait is a quiet ode to a woman whose approach to form and material are unmatched in the art world.” – Vancouver Int’l Film Festival

“While director Daniel Traub has little time to dive too deeply, the documentary serves as a fascinating glimpse into an artist’s work, inspirations and process.” – Kevin Crust, Los Angeles Times

“A fascinating and streamlined look at the renowned sculptor as we get a behind the scenes look at her creative process.” – Joe Friar, The Victoria Advocate