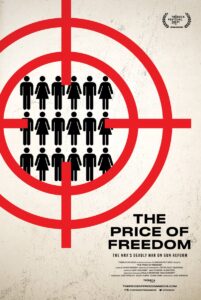 America and the role the National Rifle Association, with its outsized political and cultural influence, has played over time. The NRA believes the deaths of innocent Americans are a necessary price to pay for the freedom to own firearms without restrictions. By manipulating the narrative around guns and backing politicians who commit to upholding their agenda, the NRA has cost us far more than we realize. Featuring passionate pleas from President William J. Clinton, Representative Lucy McBath (D-GA) and

Senator Chris Murphy (D-CT); NRA Board Member and former NRA President David Keene, and activists on all sides of the issue, The Price of Freedom presents a compelling case for those brave enough to take a stand against the NRA in defense of our communities and collective future. Director

Judd Ehrlich joins us for a conversation on how the NRA has abandoned its founding principles of promoting safe and responsible gun ownership through locally-based training programs into a shameless shill for gun manufacturers and more recently into a pernicious, corrosive and ruthlessly divisive political force in American culture and governance.

For news and updates go to: thepriceoffreedommovie.com

About the filmmaker – Judd Ehrlich – Grand Clio and Emmy Award-winning director and producer is the son of an architect and schoolteacher. He grew up in lower Manhattan and, at fourteen, was the youngest feature reporter at a New York newspaper. Ehrlich’s recent documentaries KEEPERS OF THE GAME and WE COULD BE KING, produced with Tribeca Studios and The Dick’s Sporting Goods Foundation, forged a new model for documentary production and premiered at the Tribeca Film Festival and on ABC television. KEEPERS was a New York Times Critics’ Pick and nominated for a Critics’ Choice Award and KING won an Emmy and Grand Clio Award. Both films are part of the US State Department’s American Film Showcase. Ehrlich was nominated for Emmy Awards for the Tribeca Premiere RUN FOR YOUR LIFE and the PBS broadcast MAYOR OF THE WEST SIDE. His award-winning MAGIC CAMP was optioned for narrative remake and NOTES FROM LIBERIA won several awards. Ehrlich directed two television series for ESPN and a series for The CW Network. He collaborated on the editing of Sundance-winner FAMILY NAME and Ric Burns’ Emmy-winning series, NEW YORK. Ehrlich was an editor and producer at CBS News and directed film programs at BAM, Brooklyn College, JCC Manhattan and the Brooklyn Museum, hosting notables like Darren Aronofsky, Steve Buscemi and Willem Dafoe. Ehrlich is represented by Saville Productions, joining a roster that includes Wim Wenders, Barry Levinson, Oliver Stone and Werner Herzog, and directs content for Bose, Tough Mudder, MLS, Van Cleef & Arpels, Barilla, Atlantic Philanthropies, US Cellular, and the Serena Williams Fund, to name a handful. Before film, Ehrlich was a caseworker in NYC for Project Renewal, Homes for the Homeless and YAI. He lives with his wife and two children in Flatbush, Brooklyn, where his family lived for five generations. Ehrlich is a Vassar College graduate and teaches filmmaking. For more go to: flatbushpictures.com

“An absorbing, disturbing, and scrupulously well-researched documentary that lays out the nuts and bolts of the National Rifle Association’s history.” – Owen Gleiberman, Variety

“What makes The Price of Freedom a film that should be on your must-see list is the way Ehrlich presents all of this.” – Sabina Dana Plasse, Film Threat

“An unflinching and powerful look at what the NRA means to American politics and how it has used manipulation and scare tactics.” – Nathaniel Muir, AIPT

“Clear-eyed, compassionate and compelling, the documentary “The Price of Freedom” efficiently unpacks and debunks the myths it posits the National Rifle Assn. of America has deployed to further its all-guns-all-the-time agenda and foster a culture war.” – Gary Goldstein, Los Angeles Times