The new short subject documentary A CONCERTO IS A CONVERSATION 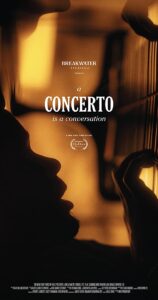 tells the story of virtuoso jazz pianist and film composer Kris Bowers as he tracks his family’s lineage through his 91-year-old grandfather, Horace Bowers, from Jim Crow Florida to the Walt Disney Concert Hall. In the 13-minute film A

CONCERTO IS A CONVERSATION, Bowers traces the process of breaking into new spaces through generations of sacrifice that came before him, focusing on the story of his grandfather Horace Bowers. As a young man, he left his home in  the Jim Crow South, eventually ending up in Los Angeles. Encountering

discrimination at every turn, he and his wife, Alice, nevertheless made a life as business owners. Today, their legacy lives on through their family and community in South Los Angeles, where a stretch of Central Avenue was recently designated Bowers Retail Square

— in case any question remained about whether it’s a place they belong. Horace Bowers tells his grandson Kris Bowers,  “Never think that you’re not supposed to be there.” A CONCERTO IS A CONVERSATION, co-directors Ben Proudfoot and Kris Bowers join us for a conversation on their deeply personal film, primer on race in Southern California and the power of music and family to help us all see the world beyond ourselves.

For news and updates go to: breakwaterstudios.com/a-concerto-is-a-conversation

Click here to watch: A Concerto is a Conversation

About the filmmaker – Kristopher Bowers (born 1989) is an American composer and pianist who has composed scores for films, video games, television and documentaries including, “Green Book,” Madden NFL, “Dear White People,” and Kobe Bryant’s “Muse.” He has recorded, performed, and collaborated with the likes of Jay-Z, Kanye West, and José James. He won the Thelonious Monk International Jazz Piano Competition in 2011 and a Daytime Emmy Award for Outstanding Music Direction and Composition in 2017 for The Snowy Day. Bowers worked on the score of Ava DuVernay’s Netflix mini-series When They See Us as well as the current Netflix hit Bridgerton. For more go to: krisbowers.com

About the filmmaker – Ben Proudfoot (born 1990) is a Nova Scotia born filmmaker and founder of Breakwater Studios, an emerging leader in the short documentary space. A former sleight of hand magician, Ben has pioneered alternative models of short documentary financing and distribution including noteworthy and award-winning collaborations with The New York Times, Charles Schwab, Annapurna Pictures and the LA Phil, earning him a spot on the 2020 Forbes 30 under 30 list. In addition to his work as an entrepreneur, Ben is an award-winning artist and filmmaker, having directed over fifty noteworthy original short documentaries. Ben’s work as a director has been selected by HotDocs, Sundance, Tribeca and Telluride. He resides in Los Angeles. For more go to: breakwaterstudios.com