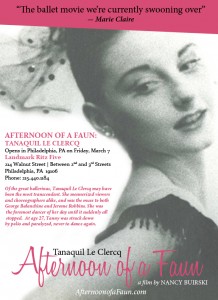 Of all the great ballerinas, Tanaquil Le Clercq may have been the most transcendent. With a body unlike any before hers, she mesmerized viewers and choreographers alike. With her elongated, race-horse physique, she became the new prototype for the great George Balanchine.  Because of her extraordinary movement and unique personality on stage, she became a muse to two of the greatest choreographers in dance, George Balanchine and Jerome Robbins.  She eventually married Balanchine and Robbins created his famous version of Afternoon of a Faun for her.  She had love, fame, adoration, and was the foremost dancer of her day until it suddenly all stopped at the age of 27. The ballet world has been haunted by her story ever since.  Director Nancy Buirski joins us to talk about an iconic artist with an indomitable spirit.

For updates on Afternoon of a Faun go to: http://www.afternoonofafaun.com/

“While it does profile the work of brilliant dancer, the film also contains two complex and moving love stories as well an account of a physically devastating tragedy followed by an extraordinary tale of struggle and survival.” – RogerEbert.com, read review