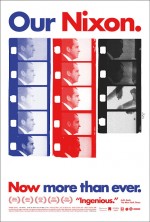 Throughout Richard Nixon’s presidency, three of his top White House aides documented their experiences with Super 8 home movie cameras. Young, idealistic and dedicated, they had no idea that a few years later they’d all be at the center of a history-making impeachment scandal. This unique and personal visual record, created by H.R. Haldeman, John Ehrlichman and Dwight Chapin, was seized by the FBI during the Watergate investigation, then filed away and forgotten for almost 40 years. OUR NIXON is an all-archival documentary presenting those home movies for the first time, along with other rare footage, creating an intimate and complex portrait of the Nixon presidency as never seen before. Director Penny Lane stops by for an informative and engaging chat on the discovery of this long forgotten film treasure and how it may affect the legacy of one of the most divisive presidents in American history.