Directed by Chris Paine and executive produced by Paine and Tiffany Asakawa, Do You Trust This Computer? examines the promises and perils of this developing era. Science 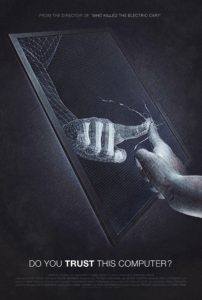 fiction has long anticipated the rise of machine intelligence. Today, a new generation of self-learning computers has begun to reshape every aspect of our lives. Incomprehensible amounts of data are being created, interpreted, and fed back to us in a tsunami of apps, personal assistants, smart devices, and targeted advertisements. Virtually every industry on earth is experiencing this transformation, from job automation, to medical diagnostics, even

military operations. Do You Trust This Computer? explores the promises and perils of our new era. Will A.I. usher in an age of unprecedented potential, or prove to be our final invention? Featuring influential minds, including but not limited to: former Google Brain co-founder & director Andrew Ng, co-founder and CEO of Affectiva Rana el Kaliouby, Osaka University robotic engineer Hiroshi Ishiguro, engineer & entrepreneur Elon Musk, OpenAI director Shivon Zilis, and co- showrunner of HBO’s Westworld, Jonathan Nolan. Director Chris Paine ((Who Killed The Electric Car?, Revenge of the Electric Car) joins us for a lively conversation on where we are and where we are heading with Artificial Intelligence.

For news and updates go to: doyoutrustthiscomputer.org

For information on other Chris Paine films go to: papercutfilms.com

“‘Do You Trust This Computer?’ covers the major talking points about the benefits and dangers of artificial intelligence, assembling them into something engaging and alarming – if not exactly in-depth.” – Noel Murray, Los Angeles Times

“This documentary covers a wide array of examples of the potentially scary downside of artificial intelligence, none particularly in depth but with enough ingenuity to cause alarm.” – Jeffrey Anderson, Common Sense Media