When she was a young lawyer, Kholoud Al-Faqih walked into the office of Palestine’s Chief Justice and announced she wanted to join the bench. 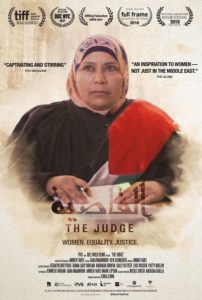 He laughed at her. But just a few years later, Kholoud became the first woman judge to be appointed to the Middle East’s Shari’a (Islamic law) courts. THE JUDGE offers a unique portrait of Judge Kholoud—her brave journey as a lawyer, her tireless fight for justice for women, and her drop-in visits with clients, friends, and family. With unparalleled access to the courts, THE JUDGE presents an unfolding vérité legal drama, with rare

insight into both Islamic law and gendered justice. In the process, the film illuminates some of the universal conflicts in the domestic life of Palestine—custody of children, divorce, abuse—while offering an unvarnished look at life for women and Shari’a. Director and producer Erika Cohn stops by to talk about her warm, moving portrait of a dedicated professional officer of the court determined to see that men and women receive the highest level of justice.

For News and updates go to: thejudgefilm.com

Find out where The Judge is screening

“The documentary is an inspiration to women – not just in the Middle East – who are determined to rise to the top of their professions, despite the odds being stacked against them.” – Gayle MacDonald, Globe and Mail

“There are scandalously few female-empowerment documentaries about Arab women that also aim to counter Islamophobia, which is why Erika Cohn’s “The Judge” is a welcome addition.” – Jay Weissberg, Variety