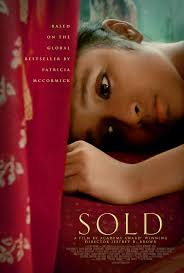 The intense, emotional story of one 13 year-old girl’s quest for freedom after finding herself a victim of human trafficking between Nepal and India, will hit the big screen in the feature film SOLD. Globally, the average age of a girl who is trafficked for sex is 13-14 years old, according to ECPAT, a global network dedicated to protecting children.  The acclaimed film is directed by Oscar®-winning filmmaker Jeffrey Dean Brown (MOLLY’S PILGRIM), executive produced by Oscar winner Emma Thompson, and produced by Jane Charles. The ensemble cast includes Gillian Anderson (X-FILES) and David Arquette. Based on the international bestselling novel by Patricia McCormick, inspired by true events, SOLD depicts the story of an extraordinary girl Lakshmi who is trafficked across the Nepal-India border and forced to work in a brothel in Kolkata, India. By telling one girl’s story, SOLD gives voice to the millions of trafficked children who are unheard and unseen. Director Jeffrey Dean Brown and Producer Jane Charles joins us to talk about the making of this illuminating and compelling film and about the world-wide, but often invisible epidemic of human trafficking.

For news and updates go to: soldthemovie.com

“The film gives us a vibrant, tangible sense of place, the color and dust of a crowded ancient city, and the layers of secrecy and corruption under which Lakshmi and those like her are trapped.” – Joyce Kulhawik, RogerEbert.com

SOLD humanizes the issue of child trafficking. By pulling us into the world of one child who is trafficked, the film provides insight into the horrors children experience but also illustrates the resilience they have to overcome such horrible situations. Emily Pasnak-Lapchick, End Trafficking Program Officer, U.S. Fund for UNICEF

Marvelous script and courageous and brilliant cast… [we] feel able to act without feeling the kind of rage and hopelessness that gets in the way of doing anything. Emma Thompson, SOLD Executive Producer

Brilliantly made. Unlike other films on child trafficking and modern slavery, SOLD makes the problem personal for the audience. Though heartbroken by what she endures, the viewer is left inspired by Lakshmi’s strength and bravery, motivated to help end modern slavery through real-world action. Alex K. Monroe, Senior Campaigns Manager, Walk Free