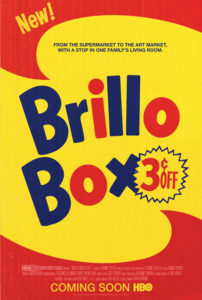 In 1969, filmmaker Lisanne Skyler’s parents bought an Andy Warhol Brillo Box for $1,000. A budding collector, her father was drawn to the work of the young, emerging artists of the time—Pop artists, Abstract Expressionists and Photorealists—and saw it as an investment. Unlike critics of the era, who panned Warhol’s consumer-themed sculptures, her mother considered it a delightful addition to the family’s Manhattan living room. Eventually the piece was traded away, largely forgotten except in family artifacts like a snapshot of baby Lisanne perched on top of the yellow cube. The filmmaker often wondered what happened to the now-iconic work that had briefly decorated her childhood. Forty years later, in 2010, the same

sculpture sold for $3 million at a record-breaking Christie’s auction. Fascinated by this eyebrow-raising turn of events, Skyler wondered about all of the personal decisions that shaped this object’s journey. What was the role it played in other lives, and what secrets did it hold about her own family? Colorfully blending Pop Art history with personal narrative, BRILLO BOX (3¢ OFF) follows this Warhol sculpture as it makes its way from a family home to the global art market, exploring the ephemeral nature of art and value, and the decisions that shape family history. Director and daughter Lisanne Skyler to talk about a sweeping and insightful look into the world of POP art and her own intimate family tale.

For news and updates go to: brilloboxmovie.com

“While tracing the 40-year journey of an Andy Warhol original from her family’s living room to the auction block, documentarian Lisanne Skyler delivers a delightful, nostalgia-tinged snapshot of the American middle class, colorfully framed by a crash course in postmodernism.” – Maggie Mackay, ASPEN INTERNATIONAL SHORTSFEST

“Brillo Box (3¢ off) is about far more than what the sculpture fetched — though that figure is staggering. It considers the aim, meaning, and collection of art. Skyler deftly weaves together photographs, interviews and observations about legacy and family, which makes her story (which is slightly heartbreaking) all the more poignant.” – Gary M. Kramer, FILM INTERNATIONAL