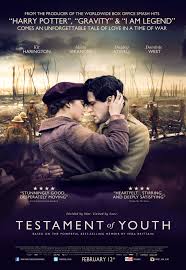 Testament of Youth is a powerful story of love, war and remembrance, based on the First World War memoir by Vera Brittain, which has become the classic testimony of that war from a woman’s point of view. A searing journey from youthful hopes and dreams to the edge of despair and back again, it’s a film about young love, the futility of war and how to make sense of the darkest times. The film features rising stars Alicia Vikander (Ex Machina, The Man from U.N.C.L.E. and the upcoming The Danish Girl), Kit Harington (Game of Thrones), and Taron Egerton (Kingsmen: The Secret Service).  Director James Kent uses his documentary background to fashion a beautifully haunting film about love, honor and perseverance. Joins us for a lively conversation on the making of his compelling new film.

For news and updates go to: sonyclassics.com/testamentofyouth/

“From first to last, “Testament of Youth” sweeps you away.” – Kenneth Turan, LA Times

“As Vera, the rebellious, moneyed young woman whose dream of graduating from Oxford is deferred when the war breaks out, Alicia Vikander is such a ferociously intuitive performer that you can’t take your eyes off her.” – Peter Rainer, Christian Science Monitor

“Evokes the march of history with a balance and restraint exhibited by few movies with such grand ambitions.” – Stephen Holden, New York Times