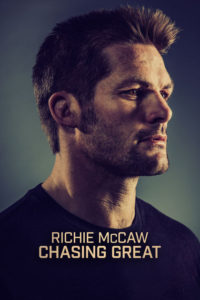 calculated determination.  He’s 34 and perhaps the best rugby player ever.  But the dream is almost over.  He is old by professional sport standards and everyone is asking when he’s going to retire.  Before his career ends Richie McCaw sets his sights on a risk-all attempt to win the Rugby World Cup back to back. No team has won it a  second time in a row.  No captain has won it twice. He will either end his career on an impossibly high note or take a nation’s dreams down with him.

Chasing Great follows the incomparable Richie McCaw through his final season as he attempts to captain the All Blacks to the first ever-back-to back World Cup win. Director and writer Michelle Walsh joins us to talk about her access to McCaw’s professional and  personal McCaw, the heartache and exhilaration of competition and what it takes, physically, emotionally and  psychologically to compete at an elite level.

For news and updates go to:chasinggreat.film

“It’s clear where all of this is going, but McCaw surprises with his mental rigor (he excelled academically) and total commitment to his sport (he plays with a stress fracture in his foot).” – Chris Packham, Village Voice

“Even non-rugby fans will know how it ends but it’s worth the nostalgic pain to keep watching until the final siren.” – Stephen Romei, The Australian