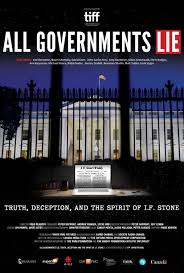 ALL GOVERNMENTS LIE: Truth, Deception, and the Spirit of I.F. Stone is a timely documentary for audiences who are increasingly seeking alternatives to news media owned by large corporations. News events and journalistic trailblazers stretching over many decades are linked together to tell this important story. This  film will resonate with audiences in the US and worldwide, as news media ownership increasingly falls into the hands of a few giant corporations.  During this year’s election coverage, US viewers continue to get daily doses of the ever increasing corporate owned journalism passing as “breaking news.” ALL GOVERNMENTS LIE explores the legacy of I.F. Stone, widely held as the conscience of investigative journalism, whose       groundbreaking reporting filled his tiny 4-page newsletter, I.F. Stone’s Weekly, from 1953 to 1971.  Stone inspired many of our current reporters who are changing the face of journalism today.  These brilliant journalists are featured in the film, including groundbreaking producer, host and author Amy Goodman (Democracy Now!), Glenn Greenwald (The Intercept), Jeremy Scahill (Dirty Wars/The Intercept), Matt Taibbi (Rolling Stone), David Corn (Mother Jones), filmmaker Michael Moore (Fahrenheit 9/11), The Young Turks founder and host Cenk Uygur, along with notable opinion leaders Noam Chomsky, Ralph Nader, Chris Hedges, and Carl Bernstein. Director Fred Peabody joins us for a lively conversation on the state of today’s journalism, both the good and the vapid.

“Even if you belong to the choir it’s preaching to, it has the rare distinction of being a movie you can agree and argue with at the same time.” – Owen Gleiberman, Variety

“In an era of disaster- and celebrity-obsessed cable news, during an election testing the virtues of objectivity, the documentary All Governments Lie is worthy testimony that many journalists are in it for the truth.” – Daphne Howland, Village Voice

“Featuring footage from the last six decades, “All Governments Lie” is a timely, convincing documentary that will cause audiences to question what they see and read.” – Kimber Myers, LA Times

“What every aspiring journalist needs to know to battle the news media’s laziness, celebrity obsessions and for-profit strategies” – NOW Magazine