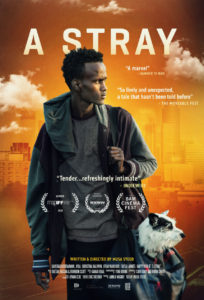 In Minneapolis’ large Somali refugee community, Adan (Barkhad Abdirahman) has nowhere to go. His mom kicked him out, and his friends are tired of his headstrong ways. As a last resort, he moves into the mosque, praying for a little help. Surprisingly, God seems to answer. Adan quickly lands a good job, devout friends, and a newfound faith. When Adan nearly hits a stray dog on the job, he’s forced to take it in for a night. But one of his new mosque friends considers the dog impure, and he throws Adan out. With Adan back on the streets, surrounded by his old crew, ex-girlfriends, prying FBI agents, and his estranged family, the dog may be his only friend as

he tries to keep his faith and get through the night. Filmmaker Musa Syeed’s first narrative feature VALLEY OF SAINTS won the World Cinema Audience Award at Sundance and was a New York Times Critics Pick. The result of an immersive research process similar to A STRAY, the film was shot during a military curfew in Kashmir, employing a community of boat people as cast and crew. His previous documentaries, also produced with cinematographer Yoni Brook, include BRONX PRINCESS (Berlinale, POV) and A SON’S SACRIFICE (Tribeca Best Short Doc, Independent Lens). Director and writer Musa Syeed stops by for a conversation on the challenges and rewards of making an intimate and moving portrait of a stranger in a strange land.

For news and updates go to: musasyeed.com

“The substantial pleasures of the movie are supplemented by the gratification of seeing an emerging talent with concerns far outside the conventional indie realm asserting himself with such authority.” – Glenn Kenny, New York Times

“The writer-director’s seemingly random yet never aimless narrative avoids predictable sentimental notes as well as any explicit backstory, leaving us to fill in the blanks.” – Dennis Harvey, Variety