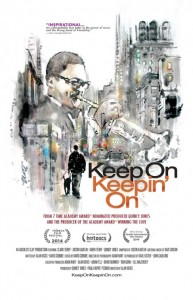 Shot over the course of five years by first time filmmaker Al Hicks, KEEP ON KEEPIN’ ON depicts the remarkable story of 93-year-old jazz legend Clark Terry. A living monument to the Golden Era of Jazz, Terry — a mentor to Miles Davis — is among the few performers ever to have played in both Count Basie’s and Duke Ellington’s bands.  In the 1960’s, he broke the color barrier as the first African-American staff musician at NBC — on “The Tonight Show.” Today, after a life spent working with and teaching the most totemic figures in jazz history, Terry continues to attract and cultivate budding talents.  KEEP ON KEEPIN’ ON highlights his friendship with the preternaturally gifted Justin Kauflin, a blind, 23-year-old piano prodigy who suffers from debilitating stage fright. Not long after Kauflin is invited to compete in an elite Jazz competition, Terry’s health takes a turn for the worse. As the clock ticks, we see two friends confront the toughest challenges of their lives. Director Al Hicks joins us to talk about one of the true giants of jazz and his indomitable spirit.

For news and updates ragarding Keep On Keepin On go to: keeponkeepinon.com

“The relationship between Terry and his mentee, Justin Kauflin, gives the movie a strong narrative spine and, more importantly, an emotional throughline unlike most other biographical docs I’ve seen.” – Dan Schindel, Movie Mezzanine

“The advice that Clark gave me musically has been able to transcend to the filmmaking process—that whole idea of trusting what you’re doing and just working really hard. He’s helped me find the possibility of a voice in another medium.” – Judy Gelman Meyer, Directors Talk