Mysterious events surround two travelers as they make their way across a remote American landscape. On the surface all seems normal, but what appears to be a simple vacation soon 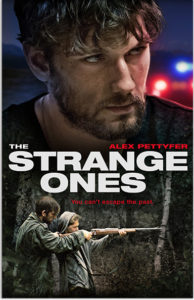 gives way to a dark and complex web of secrets. THE STRANGE ONES had its world premiere at the 2017 SXSW Film Festival where it was awarded the Special Jury Recognition for Breakthrough Performance for James Freedson-Jackson.

Director’s Statement – “There is a line late in the film where two teenage characters are engaged in an awkward conversation that consists more of silence than words. “It’s crazy to think,” the girl says, “that you like, never really know a person. You know?” The idea of “not knowing” is at the core of The Strange Ones. As filmmakers, we are most interested in stories that leave a strong impression but somehow stop short of surrendering a tidy explanation, and in 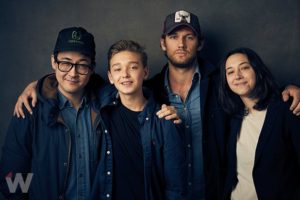 characters that have secrets that may or may not ever be fully revealed. There is something more satisfying in this for us – as if the truth, by virtue of remaining unseen, can expand upon speculation and become something larger, more profound, and \more fascinating than a straightforward answer. Perhaps we find also that this is a more accurate reflection of real life – so often we believe we understand something or someone in their entirety, only to find out that we have only really glimpsed the surface; and that beneath lies a world of complexity that we might never fully know. In that regard, The Strange Ones is a story that presents a rather simple surface, as well as a more complicated and mysterious hidden dimension.” –

“Secrets curl with thick dread around a man and boy on the run from a dark past in this elliptical and mysterious road movie.” – Chris Barsanti, Film International Journal

“The Strange Ones is a solid movie on first watch that becomes a seriously good movie on second watch. Maybe that’s a poor framework for an endorsement, but the film is more than the shock of its climax.” – Andy Crump, Paste Magazine

“It’s an artful, boundary-pushing debut from Radcliffe and Wolkstein, with breakthrough performances from Freedson-Jackson, and Pettyfer, perhaps signaling a new direction in his career.” – Katie Walsh, Los Angeles Times

“As with all great films, it takes an angle that we may have never thought of before, and one we may not soon forget.” – Fernando Andres, Film School Rejects