DARK MONEY, a political thriller, examines one of the greatest present threats to American democracy: the influence of untraceable corporate money on our 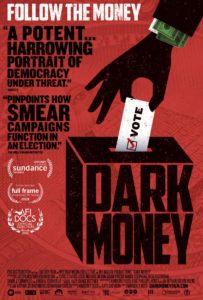 elections and elected officials. The film takes viewers to Montana—a frontline in the fight to preserve fair elections nationwide—to follow an intrepid local journalist working to expose the real-life impacts of the US Supreme Court’s Citizens United decision. For decades, Montana had arguably the cleanest campaign laws in the U.S., precisely in reaction to a long history of political corruption. Its small population and rich natural resources like copper, had made it particularly vulnerable to private-industry bribery and extortion. Through this gripping story, DARK MONEY uncovers the shocking and vital truth of how

American elections are bought and sold. This Sundance award-winning documentary is directed/produced by Kimberly Reed (PRODIGAL SONS) and produced by Katy Chevigny (E-TEAM). Kimberly joins us for a conversation on where our increasingly fragile democracy is and the very troubling place where it may be headed if dramatic measures are not taken to stop the shadowy corporate money from overwhelming our electoral process.

For news and updates go to: darkmoneyfilm.com

“There’s not a dull or dry moment in Reed’s briskly paced film about the secret assault on the American electoral and judicial process by corporations whose agenda is nothing less than the dismantling of government itself.” – Ella Taylor

“An air-raid siren of a documentary about the pernicious influence of corporate cash in American politics.” – Chris Barsanti, Film Journal International