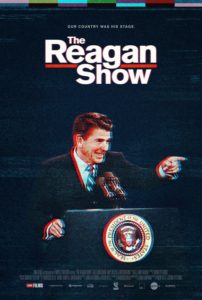 Teasing apart the spectacle at the heart of finger-on-the-button global diplomacy, THE REAGAN SHOW follows Ronald Reagan’s rivalry with charismatic Soviet leader Mikhail Gorbachev, tracing how the Communicator-in-Chief uses his public relations chops to overcome Soviet mistrust, the objections of a skeptical press corps and the looming threat of WW III. Chock full of wit and political irony, and told solely through 1980s network news and videotapes created by the Reagan administration itself, the film explores Reagan’s made-for-TV approach to politics as he faced down the United States’ greatest rival.  Pacho Velez’s & Sierra Pettengill’s timely film explores Ronald Reagan’s media savvy through the use of

previously unseen footage shot by White House staff. Co-director Sierra Pettengill (Pacho Velez) joins us for a conversation on this sweeping behind the scenes look at a pivotal moment in the history of US / Russian relations and the impact of an enveloping new media culture.

For news and updates go to: The Reagan Show

“As clever and breathtaking a look at the performative aspects of our politics as any film made in recent memory, and perhaps ever.”– Brandon Harris, Filmmaker Magazine.com

“[A] masterful documentary that is crucial and unique.” – Joshua Rothkopf, Time Out NY

“This doc says volumes about then and now.” – David Fear, Rolling Stone.com

“…a jokey yet wonky trip through the alternate reality of the modern era’s first great political media machine.” – Chris Barsanti, The Playlist