Mossville, Louisiana is a shadow of its former self – a community rich in natural resources and history, founded by formerly enslaved people and free 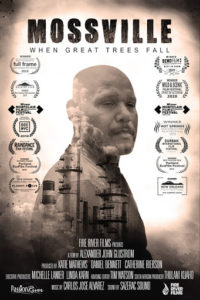 people of color – where neighbors lived in harmony, insulated from the horrors of Jim Crow. Today, Mossville is surrounded by 14 petrochemical plants and the future site of apartheid-born South African-based chemical company Sasol’s newest plant – proposed as a $21.2 billion project and the largest in the western hemisphere. The remaining family members of Mossville struggle to let go of their ancestral home – and at the center of it all is a man named Stacey Ryan. Stacey is 49 years old and a lifelong resident of Mossville. In the past ten years Stacey has lost much of his family to cancer and seen the neighborhood he grew up in demolished to make way for Sasol’s new multi-billion dollar project. Having promised his dying parents to fight the sprawling chemical companies, Stacey struggles to keep his word as his power, water, and sewage are all cut off, and his health continues to decline from ongoing chemical exposure. As Sasol encroaches on citizens’ property with buyout offers, Stacey and other community members have to decide whether to exist in a chemical war zone, or abandon land that has been in their families for generations.,MOSSVILLE: When Great Trees Fall Director and Editor Alexander John Glustrom joins us to talk about one man’s fight to hold on to the last patch of a historic community and the legacy of a shattered community.

For news and updates go to: mossvilleproject.com

About the filmmaker: Alexander John Glustrom – Director / Editor / Director of Photography – Alexander John Glustrom’s first film was the award winning documentary, “Big Charity,” winner of The Jury Award and Audience Award at New Orleans Film Festival and the 2015 Documentary of the Year by Louisiana Endowment for the Humanities. He was awarded “Filmmaker of the Year” at the 2015 New Orleans

Millennial Awards and one of New Orleans’ “40 under 40” by Gambit Magazine. He has directed, shot, produced, and edited a wide variety of film and media projects that have reached hundreds of thousands online, played at film festivals internationally and aired on major networks including HBO, CNN, Fusion, NYtimes.com, Great Big Story and Democracy Now.  Daniel Bennett, Katie Mathews and Catherine Rierson are Producers, while Linda Karn and Michelle Lanier serve as Executive Producers.

MOSSVILLE: When Great Trees Fall will be broadcast nationally on the PBS series Reel South beginning May 25 and on the world channel beginning May 31.

“Mossville captures the devastation of the destruction of a community with grace and empathy and has a message that will reverberate across generations.” – BRWC

“A sad and uncommonly stunning exploration of environmental racism and the adverse effects of industrialization on fenceline communities.” – Anti-Gravity

“A nightmarish landscape is the battleground for Stacey’s defiant spirit, as he’s forced to choose between a better life for his son and fighting to preserve his ancestors’ legacy.” – Planet in Focus