Sex! Gossip! Scandal! For over 60 years, the National Enquirer has pumped out salacious, shocking stories, stretching the limits of journalism and blurring the 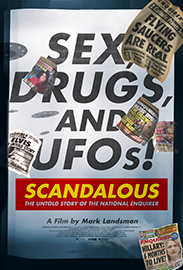 lines between truth and fiction. Magnolia Pictures’ SCANDALOUS: The Untold Story of the National Enquirer, charts the thrilling origin story and influence of (in)famous supermarket tabloid the National Enquirer. The paper that former editor-in-chief Steve Coz called “the most perfectly placed piece of propaganda in America.” SCANDALOUS is the sensational true story of the most infamous tabloid in US history, a wild, probing look at how one newspaper’s prescient grasp of its’ readers darkest curiosities led it to massive profits and influence. From its coverage of Elvis’s death, to Monica Lewinsky and the O.J. Simpson murder trial, the National Enquirer rattled the foundations of American culture and politics, sometimes allegedly using payoffs and blackmail to get its scoops. With rare archival

footage and revelations as wild as National Enquirer headlines themselves, SCANDALOUS  examines our obsession with the rich, famous and powerful, and the tabloid that has fed those obsessions for generations of Americans. SCANDALOUS: The Untold Story of the National Enquirer will open in select theaters on November 15, and features interviews with former Enquirer reporters and editors, including Iain Calder and Steve Coz, as well as journalists Ken Auletta, Carl Bernstein, and Maggie Haberman. Director Mark Landsman joins us to talk about the history of the supermarket tabloid that made UFO’s and mayhem respectable and in the process changed the way we consume all forms of media.

For news, screenings and updates go to: Scandalousfilm.com

SCANDALOUS: THE UNTOLD STORY OF THE NATIONAL ENQUIRER panel discussion on Friday (11/15) after the 7:10 pm show with director Mark Landsman and former National Enquirer reporters Tony Brenna, Judith Regan and Barbara Sternig. Q&A after the 7:10 pm show on Saturday (11/16) with producers Aengus James and Kristen Vaurio at the Royal.

“While watching this entertaining documentary, keep in mind the claim made by journalist Ronan Farrow: The National Enquirer has buried at least 60 super-sleazy stories about our… president.” – Charles Mudede, The Stranger

“The story of the National Enquirer comes to life in Scandalous, a vibrant true Hollywood story that pulls numerous twists and turns.” – Kristen Lopez, Culturess

“”Scandalous” doesn’t break a lot of new ground in style, but it is a fascinating and essential examination of the media we consume and what consumes us.” – Karen M. Peterson, AwardsCircuit.com

“A journalism expose that lives up, or down, to its hype.” – Roger Moore, Movie Nation