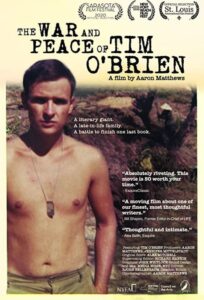 called “the best American writer of his generation,” and our “poet laureate of war” Tim O’Brien. A Vietnam veteran, and National Book Award-winner, O’Brien is one of the great voices in modern American literature. The Library of Congress recently named his groundbreaking novel about the Vietnam War, “The Things They Carried,” one of the 65 most influential books in American history. It’s practically a cliché in the military – the book everyone carries is “The Things They Carried.” But O’Brien hasn’t put pen to paper in nearly two decades. He swore off making sentences when, at a late age, he had his first of two  children. Plus, the nation was waging new wars in Afghanistan

and Iraq that he couldn’t wrap his head around – wars that both reconfirmed and upended the notions of war, soldiers, and society that animated his books. Now, Tim O’Brien is trying

to write again. He thinks the country is past due for a conversation about war’s impact. He thinks we’re running out of time. And, at age 70, that he is too. THE WAR AND PEACE OF TIM O”BRIEN follows O’Brien on his journey writing his next and last book. What makes wars worth fighting? How do we write about war? What are the obligations of citizens with respect to war?  What are the after-effects of war on individuals and families? Director Aaron Matthews (Token Exchange, The Paper), brings us inside the lives of the O’Brien family with his intimate film about the struggles of a world-renowned war writer illuminates the everyday ties between duty, art, family, and the trauma of war.

For news, updates and screenings go to: timobrienfilm.com

About the filmmaker – Director, Producer, Cinematographer, Editor: Aaron Matthews is an award-winning documentary filmmaker whose films have appeared on national and international television, and at over fifty film festivals around the world. His documentaries include, The Paper, A Panther in Africa, andMy American Girls, all broadcast on PBS’s flagship documentary series POV, or Independent Lens. He has been a Sundance Fellow and has received funding from The Sundance Institute, The Independent Television Service, The New York State Council on the Arts, The Jerome Foundation, The Brooklyn Arts Council, The Puffin Foundation, and Latino Public Broadcasting. Aaron Matthews holds a degree in English literature from Wesleyan University, and lives in Brooklyn. For more about the filmmaker: aaronmatthews.com

“As O’Brien…pours a little more of himself onto every hard-won page, all I could think to say is “Thank you for your service.”” – Roger Moore, Movie Nation