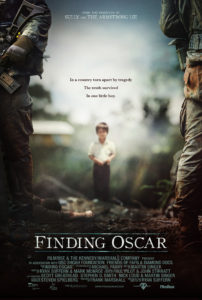 FINDING OSCAR is the feature-length documentary about the search for justice in the case of the Dos Erres massacre in Guatemala in 1982. That search leads to the trail of two little boys, Oscar and Ramiro, who were abducted during the slaughter and raised by some of the very soldiers who had murdered their families. These boys offer the only living evidence that ties the Guatemalan government to the massacre. FINDING OSCAR follows the men and women who have spent nearly two decades looking for answers—from the human-rights worker who first heard the story to the forensic anthropologists trying to identify victims and contact families. The film profiles the young Guatemalan prosecutor who took on her own government, and the U.S. immigration agents who began rounding up war criminals found living in the States. In a country built on impunity, it will take this dedicated team to find justice more than thirty years later, and uncover a truth more significant than anyone could have imagined. Filmmaker Ryan Suffern is producer and director of FINDING OSCAR, with Frank Marshall as producer and Steven Spielberg as Executive Producer. Director Ryan Suffern joins us to talk about the victims, the families, the impact that these massacres continue to have on the people of Guatemala and the continuing search of justice.

For news and updates go to: filmrise.com/finding-oscar

“The barbarity described in “Finding Oscar” is stomach-turning, but moments of courage still shine through in this unsettling yet vital documentary.” – Ken Jaworoski, New York Times

“Suffern strikes a respectful, not entirely hopeless tone throughout, allowing those affected by the civil war in general and the Dos Erres massacre in particular to speak at length about their experiences.” – Michael Nordine, Village Voice