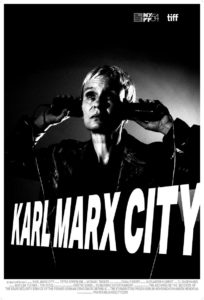 In this chilling, intimate and evocative documentary, KARL MARX CITY filmmaker Petra Epperlein returns to the proletarian Oz of her childhood, twenty-five years after the collapse of the German Democratic Republic (GDR), to find the truth about her late father’s suicide and his rumored Stasi past. The Stasi, the GDR’s Ministry for State Security, was the “shield and sword” of a ruling party that was well aware of the illegitimate nature of its power. This was, after all, a country living on one side of a wall erected—officially—not to keep the people in, but to keep the fascists out. Under the guise of combating reactionary forces, the apparatus implemented a policy of total surveillance. Much like her GDR hometown, Karl Marx City, which was redacted from public memory after German reunification, Petra Epperlein’s father erased himself. Right after the new year in 1999, he cleaned his car, burned all of his photographs and letters, and then took his own life near the house where she was raised. Had he been an informant for the secret police? Was her childhood an elaborate fiction? As she looks for answers in the Stasi’s extensive archives, she pulls back the curtain of her own ostalgia and enters the parallel world of the security state, seeing her former life through the lens of the oppressor. KARL MARX CITY Reconstructs everyday GDR life through declassified Stasi surveillance footage, the past plays like dystopian science fiction, providing a chilling backdrop to interrogate the apparatus of control and the meaning of truth in a society where every action and thought was suspect. Co-directors Petra Epperlein and Michael Tucker (Gunner Palace, The Prisoner Or How I Planned to Kill Tony Blair) join us for a conversation on going home, what it means to live in a surveillance state and facing down a complex crosscurrent of family history.

For news and updates go to: karlmarxcity.com

“… a shrewd personal inquiry into the mass psychology of fear and oppression … a film that ingeniously subverts the weaponry of Cold War-era surveillance, employing the tools of the Stasi’s intelligence-gathering operation toward a far more principled end. Whereas the secret police sought to root out and destroy even the slightest hint of subversive activity among a terrified populace, Epperlein and Tucker sift through these illicit materials — and forge their own fresh images and interviews — with an eye toward illuminating the truth and possibly even vindicating the innocent. … Shot in evocative black and white, Karl Marx City is a sleek, absorbing detective story, a fascinating primer on mass surveillance in the pre-Snowden era, and a roving memoir of East German life.” – Justin Chang, LA Times

New York Times Critic’s Pick: “… a smart, highly personal addition to the growing syllabus of distressingly relevant cautionary political tales. … The mystery of her (Epperlein’s) father’s life and death provides Karl Marx City with suspense, and with a concrete sense of profound moral and emotional stakes. Repressive regimes excel at creating ambiguity, at making complicity easier than resistance and at blurring the lines between heroes and villains. Ms. Epperlein and Mr. Tucker, shooting in black and white and making judicious use of historical footage, brilliantly evoke a landscape of gray areas. They also uncover glimmers of decency, loyalty and solidarity — the tiny cracks in the totalitarian edifice that foretold its eventual and inevitable collapse.” – A.O.Scott, The New York Times

“[A] must-see… An essayistic, quietly moving look at another lost world… The movie draws you in quickly with its intelligence, its restrained emotions and its jaw-dropping period material, which includes some wildly creepy Stasi surveillance imagery.” – Manohla Dargis, The New York Times