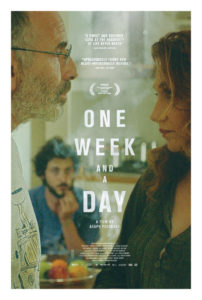 In the Jewish religion, a week of sitting Shiva (or mourning the deceased) is called for after a funeral. However, for Eyal and Vicky, a week is hardly enough time to properly mourn the loss of their 25-year-old son Ronnie. A married couple edging into the back half of middle age, the two find themselves reacting to the end of Shiva in markedly different ways.  A return to routine seems to be in order for Vicky, a teacher, as she finds herself back at school trying to abruptly kick out the substitute assigned in her stead. Meanwhile, shopkeeper Eyal opts for a total abdication of routine, as he steals his dead son’s bag of medical marijuana, and proceeds to get high, play ping-pong and judge air guitar routines with his neighbor’s stoner son Zooler. As the world refuses to accommodate Vicky and Eyal’s sensitivities during their time of bereavement — taxi drivers are still difficult, neighbors are still obnoxious, and grave diggers are just as indifferent as anyone else in the service industry — the two grieving parents find themselves acting out in outlandish ways as they attempt to regain a sense of control over their lives. Asaph Polonsky’s debut feature ONE WEEK AND A DAY juxtaposes the grieving process against the immutable fact that, despite the most painful losses imaginable, the world stops for no one’s mourning. With endearing performances from Shai Avivi and Evgenia Dodina as Eyal and Vicky, and Tomer Kapon as Zooler, ONE WEEK AND A DAY provides a nuanced perspective on loss that’s as funny as it is insightful. Director Asaph Polonsky joins us to talk about his thoughtful and nuanced film of loss, grieve and resilience.

For news and updates go to: oneweekandaday.oscilloscope.net

“Tears of laughter and tears of grief are both in abundant supply in Asaph Polonsky’s uproariously funny and heart-wrenchingly moving ONE WEEK AND A DAY.” – Ben Croll, THE WRAP

“A sweet and subdued look at the absurdity of life after death.” – David Ehrlich, INDIEWIRE

“The strength of Asaph Polonskys debut feature is that it’s actually a bittersweet comedy-drama in which the pain is as real as the frequent chuckles.” – Boyd van Hoeij, THE HOLLYWOOD REPORTER

“Asaph Polonsky’s moving, deceptively simple film ONE WEEK AND A DAY looks at that supremely difficult day after the shiva ends.”Hannah Brown, – THE JERUSALEM POST