RUMBLE: THE INDIANS WHO ROCKED THE WORLD, reveals the rousing history of American Indians in popular music, kicks off with Link Wray (Shawnee) whose raw, 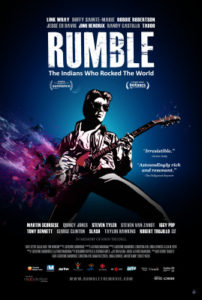 For news and updates go to: rumblethemovie.com

“What is strikingly brought home in Rumble is how the vast stew of influences in American music, rather than diluting everything, makes the music all the more powerful.” – Peter Rainer, Christian Science Monitor

“In the end, the story is one not only of rock- and pop-culture history, but of human persistence and indigenous contributions that have been historically (and often intentionally) overlooked.” – Brad Wheeler, Globe and Mail

“It’s been a terrific few years for music documentaries, and that winning streak continues with “Rumble: The Indians Who Rocked the World.”” – Ken Jaworowski, New York Times