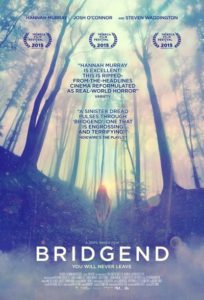 BRIDGEND premiered at the 2015 Tribeca Film Festival, winning 3 of the 6 main awards – Best Actress, Best Cinematography and Best Editing. Based on a real life, mysterious teenage suicide cluster that took place in a former coal mining province in Wales, filmmaker Jeppe Rønde followed teenagers in the area for six years, and wrote the narrative script based on their life stories. Shot entirely on location in Wales, many of the local teenagers act in the film as well. Deftly structured around young heroine Sara (an award-winning performance from Hannah Murray from UK’s Skins and Gilly on Game of Thrones), the film paints a sensitive exploration of natural adolescent confusion, romanticism, and sadness, set amidst rugged natural landscapes and spectacular cinematography. This is filmmaker Jeppe Rønde’s fiction film debut. Director Jeppe Rønde joins us to talk about his haunting and mysterious tale of lost youth and intense love.

To sign up and watch Bridgend go to: fandor.com/

“Hannah Murray is excellent! This is ripped-from-the-headlines cinema reformulated as real-world horror film, with a shivery stylistic nod to the crime drama of Rønde’s homeland.”  – Variety

“Haunting! (Hanna) Murray’s Tribeca win for Best Actress is well deserved. A provocative film that eventually blazes to a searing finish.” – The Playlist

“15 Must-See Movies at Tribeca Film Festival 2015. While the movie could have played the story for cheap creeps, (Filmmaker) Ronde instead puts a sharp focus on how its heroine’s natural adolescent confusion, romanticism and sadness are magnified by the continuing loss of her peers.” – Rolling Stone

“Throughout, (Filmmaker) Ronde’s visuals are intense and exhilarating.” – Screen Daily