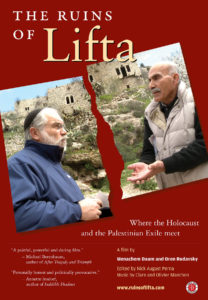 In this new documentary from filmmakers Menachem Daum and Oren Rudavsky (Hiding and Seeking, A Life Apart), audiences will travel to Lifta—the only Palestinian village abandoned during the 1948 Arab-Israeli war that has not been destroyed or repopulated by Jews. Lifta, at the western entrance to Jerusalem, is rarely a destination on any tourist map despite its significant history. The village is now threatened by an Israeli development plan that would convert it into an upscale Jewish neighborhood and forever change its character. With the support of the Palestinian and Jewish Coalition to Save Lifta, Lifta has become a battleground between developers, the Israeli Land authority, and its defenders. Lifta’s unique history and architectural treasures have made it a candidate to become a UNESCO World Heritage site, pending far from certain Israeli government approval. Oren Rudavsky (director, co-producer and director of photography) was co-producer and co-director of HIDING AND SEEKING and A LIFE APART. Rudavsky is the recipient of a Guggenheim Fellowship and has received awards and grants from the National Endowment for the Arts, the National Endowment for the Humanities, the New York State Council for the Arts and more. His most recently completed film COLLIDING DREAMS is a feature length documentary that was supported by a media grant from the National Endowment for the Humanities. Director Oren Rudavsky stops by to talk about his remarkable film and the chance for some form of reconciliation in this troubled land.

For news and updates go to: firstrunfeatures.com/ruinsoflifta

“Watching these sturdy carriers of suffering inevitably argue, your spirits may sink. But you also can’t help but notice that the rocky terrain requires them at times to hold on to each other.” – Robert Abele, LA Times

“A vital study of loss and memory. Grounded in the art of listening, ‘The Ruins of Lifta’ builds a powerful, personal, political conversation between Palestinians and Israelis looking to live differently. The result is necessary viewing.” – Diana Clarke, Village Voice

“The Ruins of Lifta offers a muscular example of ability of documentaries to make the political intensely personal. More painfully, it’s also a case study in the limits of benign intention.” – Ella Taylor, NPR