Underground filmmaker Barbara Rubin’s 1964 art-porn masterpiece “Christmas on Earth”, made when she was only 18 years old, shattered creative and sexist 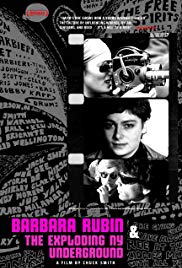 boundaries and shocked NYC’s experimental film scene. Working with Jonas Mekas at the Filmmaker’s Coop, Rubin was instrumental in creating NYC’s thriving underground film community and a rare female voice in a world of powerful men. A rebellious Zelig of the Sixties, she introduced Andy Warhol to the Velvet Underground and Bob Dylan to the Kabbalah. But beyond shaping the spirit of the Sixties, Barbara was seeking the deeper meaning of life. After retiring to a farm with Allen Ginsberg, she shocked everyone by becoming a Hasidic Jew. How and why did

one of the 1960’s freest spirits submit to a religious life? For years, 94-year-old filmmaker Jonas Mekas has saved all of Barbara’s letters and cherished her memory. Working with Mekas’ footage and rare clips from the Andy Warhol archives, the film takes us inside the world and mind of Barbara Rubin; a woman who truly believed that film could change the world and then vanished into obscurity. Director Chuck Smith joins us for a conversation on the life and times of a gifted artistic protégé and the impact she had on the people who loved her.

For news and updates go to: barbararubinmovie.com

“This bold, enthusiastic documentary details the unsung yet important role played by its subject in the 1960s artistic counterculture.” – Nick Schager Variety

“An evocative portrait of a vibrant and mysterious artist.  It’s a riveting tale of an extraordinary, seemingly uncontrollable force, a supremely talented woman dealing with mental illness, a central figure in an artistic movement who was gone too soon.” – This Week in New York

…pound for pound, minute for minute, there are few biographical documentaries more impressive than this.” – Joshua Brunsting Criterioncast