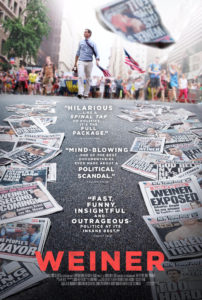 Anthony Weiner was a young congressman with one of the most promising careers in Washington when a sexting scandal forced a humiliating resignation. Made with unprecedented access as he mounts his New York City mayoral campaign, WEINER is a thrilling look inside his impending political meltdown. What begins as an unexpected comeback takes a sharp turn once Weiner is forced to admit to new sexting allegations. As the media descends and dissects his every move, Weiner desperately tries to forge ahead, but the increasing pressure and crippling 24-hour news coverage halt his political aspirations dead in their tracks.  WEINER teeters between political farce and personal tragedy.  Filmmakers Josh Kriegman and Elyse Steinberg stop by for a conversation on how gaining the trust and confidence of Huma Abedin and Anthony Weiner has given us a remarkably complex and nuance window into one of the highest profile and most tragic political scandals of the last 20 years.

For news and updates go to: ifcfilms.com/films/weiner

A “you are there” doc shot and edited with a bent toward dramatic, cinematic storytelling. – Noel Murray·A.V. Club

Directed by Josh Kriegman and Elyse Steinberg from a structure they hammered out with Eli B. Despres, Weiner is a tabula rasa doc — one of the most provocative of its kind I’ve seen. – David Edelstein·Vulture

The rise, fall, rise and fall again of an American politician with a quick wit and even quicker Twitter fingers. – Gersh Kuntzman·New York Daily News

“One of the best documentaries ever made about a political scandal. Weiner is nothing less than a true American tragedy – but this hilarious and humbling portrait rightly sees him as so much more.” – David Fear, Rolling Stone