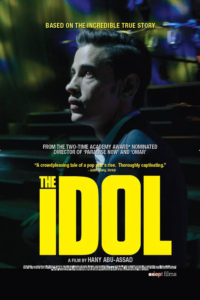 “The Idol” is two-time Academy Award nominated Director Hany  Abu-Assad’s new film. Hany is only one of three foreign language  filmmakers nominated for two Oscars in this century! “The Idol” which World Premiered at the Toronto International Film Festival is an inspirational, upbeat, crowd-pleasing change-of-pace based on the true story of the young man who escaped from Gaza into Egypt (and finally Lebanon) for a chance to be crowned Arab Idol champion. To so many with conflict, destruction and despair but to Mohammed Assaf, and his sister Nour, Gaza is their home and their playground. It’s where they, along with their best friends Ahmad and Omar, play music, football and dare to dream big.  For Mohammed and Nour, nothing less than playing the world famous Cairo Opera Hall will do. It might take them a lifetime to get there but, as Mohammed will find out, some dreams are worth living for. Along the way, Mohammed will experience tragedy and loss. The world around him will shatter. Mohammed knows he has a rare gift. Mohammed auditions for Arab Idol, the most popular show in the Arab world, are taking place in Cairo. Somehow, he finds a way and makes it in front of the judges in Egypt. From there, destiny awaits, a chance to change his life and give a voiceless people the greatest feeling of all: the freedom to love, live and feel free. Director and writer Hany Abu-Assad joins us for a conversation on the challenges and rewards of bringing this revelatory story to life.

For news and updates go to: adoptfilms.com/the-idol

“Mr. Abu-Assad, who wrote the script with Sameh Zoabi, mounts an idealistic appreciation of music as a way of bridging boundaries through a unifying appeal to beauty, gliding past differences in the soulful pleasure of song.” – New York Time

“It’s about art overcoming setbacks and bringing happiness to a region beset by troubles, the sort of cheerful story that speaks a universal language to any audience.” – Minneapolis Star

“Assaf’s 2013 Arab Idol victory occurred around the time the campaign in this week’s Weiner began, and both are recent period pieces about how the media can influence politics, for good and ill. The Idol ends on a far more hopeful note, to put it mildly.” – SF Weekly