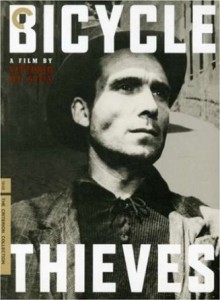 WE WEREN’T JUST BICYCLE THIEVES. NEOREALISM tells the story of the most important cinema trend that Italy has ever produced – Neo Realism. Born after the Second World War, this veritable cultural revolution rapidly became a boundless source of inspiration for movie-makers throughout the entire world. Even today it influences those wanting to produce quality movies characterized and identified as Italian products able to be exported as well. Director/producer Gianni Bozzacchi chronicles this amazing time in film through this new documentary featuring clips from the classic neorealisim films and interviews with the era’s great directors including De Santis, Rossellini, Visconti, De Sica, Fellini, Germi and many more.  Even today, the style and creativity associated with this period can be seen in the likes of American filmmakers such as Bertolucci, Scorcese, Coppola, Spielberg, Tarantino and others. It is precisely one of the masters of this unique current rich in different personalities who introduces the story – Carlo Lizzani – whose ‘lesson’ reconstructs the birth and development of Neorealism in Italy. It combined innovative movie techniques with a new view based on a ‘true’ interpretation of reality. Director Bozzacchi joins us to talk about the seismic shift the neorealist caused in world cinema and the impact their work continues to have filmmakers.

WE WEREN’T JUST BICYCLE THIEVES. NEOREALISM director Gianni Bozzacchi will participate in a Q&A after the 7:20 screening at the Music Hall on Friday, October 9th.

“[A] short charmer of a doc…all [the] history and critical appreciation is lightened by Lizzani’s genial goofiness.” – Village Voice

“We Weren’t Just Bicycle Thieves. Neorealism” is as breezy and affable as film histories get.” – Robert Abele, LA Times