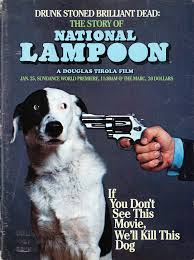 For news and updates go to: magpictures.com/nationallampoon

DRUNK STONED BRILLIANT DEAD: THE STORY OF THE NATIONAL LAMPOON opening in Los Angeles at the Nuart Theatre on October 2, and at Laemmle’s Playhouse 7 in Pasadena and Laemmle’s NoHo 7 in North Hollywood on October 9 (opens in NY and on VOD/iTunes September 25).

Director Douglas Tirola will be doing a Q & A Friday, October 2nd and Saturday, October 3rd after the 7:30PM screenings.