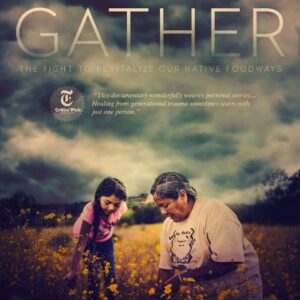 decimated ancestral food systems, while battling against the historical trauma brought on by centuries of genocide.  The early American economy was solely based on extracting money from the land. This nascent economy needed labor, but it mainly needed land. Stolen native land fueled American capitalism while slavery drove the economy. Native bodies were impediments because they occupied land the American economy needed, thus the genocide of thousands of indigenous people.  After a century of stealing land, the American government began an active program to destroy Native food systems to subjugate Natives. In doing so, they destroyed tens of thousands of years of deep knowledge of the food space. Native Americans are now fighting to re-establish their right to their lands and their food traditions – this fight for food is as important as the fight against pipelines.  As the pandemic continues to disproportionately affect Indian Country (IC), the common narrative is to blame

poverty.  In reality, IC is ravaged due to inadequate infrastructure, lack of health systems and environmental racism – directly driven by government disregard of legal and treaty obligations. Director Sanjay Rawal (Food Chains) talks with us about how the US government continues to neglect these communities and perpetuate its long-term genocide and the efforts of the Native American people’s to fight back.

For news, updates and screenings go to: gather.film

Gather is now available to stream on iTunes (US/UK/Canada), Amazon (US/UK) and Vimeo-on-Demand (rest of the world).

About the filmmaker – A James Beard Award winning filmmaker, Sanjay  Rawal made FOOD CHAINS (EP Eva Longoria, Eric Schlosser) which chronicled the battle of the Coalition of Immokalee Workers, a small group of Oaxacan and Chiapan indigenous farmworkers in Florida, against the largest agribusiness conglomerates in the world. The film was released theatrically in a number of countries (Screen Media in the US) and won numerous awards – including citations from the US Conference of Mayors, the Clinton Global Initiative and the White House. The film was also a Winner (shared) of the 2016 BritDoc Impact award and several festival prizes. Sanjay’s last film 3100: RUN AND BECOME won several festival prizes, had a robust theatrical release in the US in 2018 and is opening in traditional theatrical engagements across Europe and Australia in 2020 and 2021.

“Rawal covers a substantial amount of ground and deftly balances the dense material without losing sight of the mission driving the bigger story: Healing from generational trauma sometimes starts with just one person.” – Lovia Gyarkye,

“The stunning cinematography accentuates every aspect of the story, the beauty of our land, and the need to understand the gifts we have all been given to live a life of truth about our pasts and create a new path for the future.” – Pamela Powell, Reel Honest Reviews

“Rawal’s movie offers a fascinating, visually striking glimpse of just how the seeds of oppression and racism can thrive for generations.” – Rob Rector, Film Threat