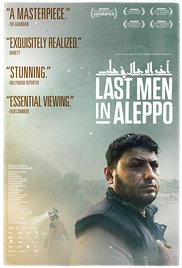 After five years of war in Syria, the remaining citizens of Aleppo are getting ready for a siege. We follow the volunteers from The White Helmets as they experience the daily life of death and struggle in the streets of the city. They fight for sanity in a place where war has become the norm. Khaled, Subhi and Mahmoud are among the first to enter the destroyed buildings, scouring through the rubble in search of bodies and signs of life. They now live more or less under siege and constant bombings, together with the remaining 350.000 civilians in Aleppo. They all struggle with the same dilemma: Should they flee and bring their families to safety, or should they stay and fight for their city? Director Feras Fayyad talks about the fearless actions of the The White Helmets and his gripping, harrowing and sobering documentary.

For news and updates go to: Last Men in Aleppo

“‘Last Men in Aleppo’ is likely to make you almost ashamed of your comforts and leave you with a feeling of impotence.” Glenn Kenny, The NYTimes

“You should — you must — see Last Men in Aleppo to witness an ongoing tragedy. But you should also see it to learn humility.” – David Edelstein, Vulture

“Last Men In Aleppo has the upsetting urgency of breaking news: There are moments that could have come straight from a live stream, given the violence that’s still rocking Syria, months after Fayyad’s cameras stopped rolling.” – A.A. Down, AV Club