When Steve Bannon left his position as White House chief strategist less than a week after the Charlottesville “Unite the Right” rally in August 2017, he was 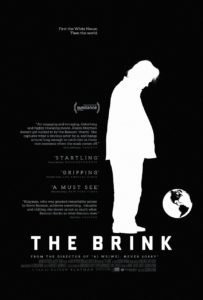 already a notorious figure in Trump’s inner circle, and for bringing a far-right ideology into the highest echelons of American politics. Unconstrained by an official post – though some say he still has a direct line to the White House – he became free to peddle influence as a perceived kingmaker, turning his controversial brand of nationalism into a global movement. Alison Klayman’s THE BRINK follows Bannon through the 2018 mid-term elections in the United States, shedding light on his efforts to mobilize and unify far-right parties in order to win seats in the May 2019 European Parliamentary elections. To maintain his power and influence, the former Goldman Sachs banker and media investor reinvents himself – as he has many times before –

this time as the self-appointed leader of a global populist movement. Keen manipulator of the press and gifted self-promoter, Bannon continues to draw headlines and protests wherever he goes, feeding the powerful myth on which his survival relies. Director and Cinematographer Alison Klayman (Ai WeiWei: Never Sorry, On Her Shoulders) joins us for a conversation on gaining access and the confidence of a man who has maneuvered his way into the darkest corners of white-wing global brinksmanship.

For news and updates go to: thebrinkfilm.com

For more information on Alison Klayman go to: alisonklayman.com/the-brink

“The Brink” is an impeccably crafted verité ramble – an engaging and enraging, disturbing and highly revealing movie…” – Owen Gleiberman, Variety

“What makes The Brink so different from just another platform for this professional troll? Though Klayman sticks to a largely vérité approach of following her subject around and observing his various interactions, she also provides important context.” – Bilge Ebiri, New York Magazine / Vulture