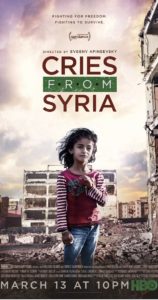 CRIES FROM SYRIA will take the audience on a unique, five-year journey, from Syria to Turkey, through Jordan, Lebanon and into Europe. They will see the situation from the inside out, through the eyes of those trapped in-between – many of them children – and experience their suffering, bravery, struggle, survival and hope. In March 2011, the Syrian people, inspired by events in Tunisia, Libya and Egypt, rose up against the authoritarian rule of President Bashar al-Assad. Public protests sparked by the arrest and torture of children who had been detained after writing anti-regime graffiti led to violent crackdowns. As what would become a long civil war intensified, the Islamic State and other groups began seizing Syrian territory and imposing brutally oppressive conditions of their own. Stranded between the opposing forces in the conflict, hundreds of thousands of Syrians have been killed, seven million have been internally displaced and more than five million have desperately tried to survive by fleeing the country. Two-thirds of those who have fled to date are women and children. CRIES FROM SYRIA is a searing, comprehensive account of the Syrian war from the inside out. The film draws on hundreds of hours of war footage from Syrian activists and citizen journalists, as well as testimony from child protestors, revolution leaders, human rights defenders, ordinary citizens and high-ranking army generals who have defected from the government. Their collective stories are a cry for attention and help from a world that little understands their reality or agrees on what to do about it. Oscar®-nominated Director Evgeny Afineevsky (Winter on Fire: Ukraine’s Fight for Freedom) joins us to talk about his unflinching look inside our own heart of darkness.

For news and updates go to: criesfromsyria.com

“If the idea of cozying up to Russia strikes you as harmless, or all those Syrian refugees are too far away to seem real, the HBO documentary Cries From Syria is something you ought to watch.” – Neil Genzlinger, New York Times

“Documentarian Evgeny Afineevsky offers a comprehensive, immensely powerful look inside the Syrian civil war through this vital film that aims for the heart with urgency.”- Tomris Laffly, Film Journal International

“It’s understandable why many people struggle to process the tsunami of devastating news coming out of Syria, but Evgeny Afineevsky’s extraordinary film vigorously cuts through the noise, and dramatically shows us the human cost of the war through the eyes of children and the innocent.” -Jamie Carmichael, President-Film at Content

“Cries from Syria is one of the most heart-rending documentaries at Sundance, with disturbing images of the civil war including infants killed by sarin gas released by Syrian President Bashar al-Assad and schoolchildren tortured by the regime for writing anti-government graffiti.” -The Wrap