THE DEPARTURE, Lana Wilson’s (After Tiller) poetic and deeply moving look at a former punk-turned-Buddhist priest in Japan who has made a career out of 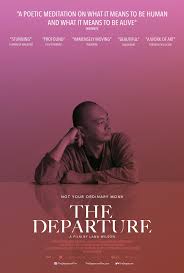 helping suicidal people find reasons to live. One of the discoveries of the 2017 Tribeca Film Festival and featured at some of the world’s top documentary festivals, THE DEPARTURE follows a 44-year-old Tokyo native, Ittetsu Nemoto loves riding his motorcycle and dancing all night in clubs. But he’s also a Rinzai Zen priest, who lives with his wife, mother and baby son at a temple in the remote countryside of Gifu prefecture, Japan. There, over the last ten years, he has become famous for his work in combating suicide. But this work has come increasingly at the cost of his own family and

health, as he refuses to draw lines between the people he counsels and himself. With astonishing access and artistry, Wilson’s camera captures Nemoto at a crossroads, when his growing self-destructive tendencies lead him to confront the same question his patients ask him: what makes life worth living? Director Lana Wilson (After Tiller) joins us for a conversation about death, love, priorities and family.

For news and updates go to: thedeparturefilm.com

The Departure opens in Los Angeles at Laemmle’s Monica Film Center on Friday, October 20 with other cities to follow.

“A beautiful, wise, and deeply empathetic immersion into one fascinating character’s unique approach to suicide prevention. A quietly impressive work whose images, characters, and ruminations linger on long after the lights come up.” – Scott Macaulay, Filmmaker Magazine

“Immensely moving. Lyrical and deeply meditative… digs deep into major questions without being afraid of the answers.” – Kate Erbland, Indiewire

“Nemoto’s teaching is as much about embracing life as it is about facing death.
He offers hope for all.” – Joan Oliver Duncan, Tricycle Magazine