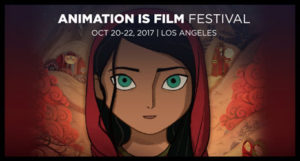 animation Festival and Market, and Variety magazine, have announced the launch of ANIMATON IS FILM, an annual animation film festival in Los Angeles. The first edition will run October 20-22 at the TCL Chinese 6 Theater in Hollywood (Mann’s Chinese Theater) with a showcase of 20 programs including feature films in competition, special presentations,

retrospectives and short film programs. ANIMATION IS FILM aims to fill a gap in the US market by establishing a world class animation festival on par with the major events in Europe and Asia – and locating it in the world capital of animated filmmaking. The Festival will be a vocal advocate  in the heart of Hollywood, for excellence in animation, and for filmmakers who push the boundaries of their art to the fullest range of expression that the medium is capable of. GKIDS and Animation is Film founder Eric Beckman stops by to talk about his love of animation and the endless possibilities for enriching and entertaining filmmaking contained in it.

For information and updates go to: animationisfilm.com

Location: Films will be screened at 6801 Hollywood Blvd, Hollywood, CA 90028 at the TCL Chinese 6 Theatre Multiplex on the Hollywood Walk of Fame.

Click here to meet the filmmakers of Animation is Film

Animation is Film Festival seeks to:

• Present a highly selective, annual showcase of the best new works of animation from around the world, with programs for both adults and families.

• Champion and support filmmakers who use animation to pursue unique cinematic visions and who are unconstrained by conventional notions of what animation is capable of.

• Champion and support filmmakers from a wide range of cultural, economic, national and geographic backgrounds.

• Have a positive impact on Los Angeles’ diverse communities by making the Festival programs available to the widest range of audiences.