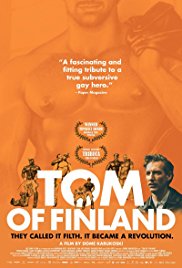 fantasies of a generation of gay men, influencing art and fashion before crossing over into the wider cultural consciousness. But who was the man behind the leather? After serving in the army in WWII, Touko returned to repressive Finnish society of the 1950s, haunted by traumatic experiences. Moving in with his affectionate but unenlightened sister Kaija (Jessica Grabowsky), he fell in love with her lodger, handsome dancer Veli (Lauri Tiklanen), who Kaija also fancied. Unable to express his feelings openly, Touko poured them into his drawings, creating his vision of the hypermasculine leatherman. Soon his art was famous under his secret pseudonym, but getting it published was a struggle that took Touko to California, where he and his art were finally embraced amid the sexual revolution of the 1970s. Tom’s story is one of love, courage and perseverance, mirroring the gay liberation movement for which his leather-clad studs served as a defiant emblem. Finland’s Official Selection for Best Foreign Language Film consideration at the 90th Academy Awards. Actor Pekka Strang joins us for a conversation on his nuanced and winning portrayal of an iconic artist and unexpected champion of equal rights for the LGBTQ community.

For news and updates go to kinolorber.com/film/Tom of Finland

Tom of Finland opens on October 20, 2017 at the Landmark Nuart Theatre in Los Angeles with a Q&A with actor Pekka Strang after the Friday 7 PM screening.

For tickets and showtimes go to landmarktheatres.com/nuart

“Though not explicit per se, Tom of Finland is quite visceral; you can practically smell this movie, with many scenes reeking of cigarettes, sweat, and …” – Sherilyn Connelly, SF Weekly

“Pekka Strang does a fantastic job as Laaksonen; his playfully nuanced performance adds to the beautifully sedate way in which the story is told.” – Linda Marric, HeyUGuys