Hard headed Louisiana fisherman Thomas Gonzales doesn’t know what will hit him next. After decades of hurricanes and oil spills he faces a new threat – hordes of 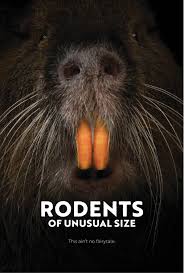 monstrous 20 pound swamp rats. Known as “nutria”, these invasive South American rodents breed faster than the roving squads of hunters can control them. And with their orange teeth and voracious appetite they are eating up the coastal wetlands that protects Thomas and his town of Delacroix Island from hurricanes. But the people who have lived here for generations are not the type of folks who will give up without a fight. Thomas and a pack of lively bounty hunters are hellbent on saving Louisiana before it dissolves beneath their feet. It is man vs. rodent. May the best mammal win. Rodents of Unusual Size is a documentary by Quinn Costello, Chris Metzler and Jeff Springer (Everyday Sunshine,The Story of Fishbone). Co-director Jeff Springer join us to talk about the other ‘beast of the Southern wild.”

For news and updates go to: rodentsofunusualsize.tv

“Rodents of Unusual Size is also a look at how human folly can contribute to environmental disaster, but awareness and ingenuity can help bail us out.” – Peter Keough, Boston Globe

“Depicting the resilience of both the nutria and the Louisianans who’ve endured their presence for many years, Rodents of Unusual Size proves enjoyably quirky and informative.” – Frank Scheck, Hollywood Reporter

“… a squirmy, funny, fascinating documentary that mixes history, zoology and social and cultural anthropology to examine the relationship of the giant rat to the bayou Louisianans who hunt, skin and sometimes even eat the dagger-incisored critters.” – John Beifuss, Commercial Appeal