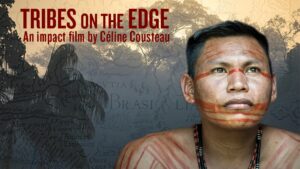 Brazilian Amazon after a fateful email from Beto of the Marúbo tribe who beckons her back to help tell his people’s story. Céline, who comes from a lineage of renowned explorers,  ventures into the heart of the jungle to explore the health crises and the threats to land and human rights of the Indigenous Peoples of the Vale do Javari. From a history of invaders bringing devastating diseases, to ongoing illegal activities, to the alarming dismantling of all protection of their land and human rights by the government – these indigenous communities are fighting to protect

their home, critical to the ecological balance of our planet, and as a result…they protect us. TRIBES ON THE EDGE is Céline’s first full feature documentary.  The film is co-written by Joseph Kwong and Executive Produced by Bill Miller, Mercedes Zobel, James Cox and Çapkin Van Alphen. Director Celine Cousteau joins us for a lively conversation on the slow-motion genocide of indigenous people who happen to live in and steward some of the most ecologically valuable and endangered eco-system on the planet and how we can do something to stop the Brazilian government crime against humanity.

For news, updates and screenings go to: tribesontheedge.com

Make a difference, go to: tribesontheedge.com/impact-campaign

TRIBES ON THE EDGE is out on VOD on Feb 2.

About the filmmaker – Céline Cousteau, Expedition Leader, Director and Producer – Céline Cousteau is a humanitarian and environmental activist working with a variety of mediums that range from documentaries to art, from consulting with corporations and foundations to public speaking. Each form shares the same message of interconnectivity between humans and the natural world. As a documentary film director, producer, and presenter, Céline is the founder and executive director of CauseCentric Productions, creating cause-focused content. Extending her family legacy and her expertise, Céline co-founded The Outdoor Film Fellowship, a nonprofit program whose mission is to empower young the next generation of filmmakers, creatives, and activists to inspire change through leadership, film, and the arts. Céline is ambassador for the TreadRight Foundation and on the board of directors of the National Aquarium in Baltimore. Her previous work has included being Guest Designer for Swarovski and Member of the World Economic ForumCouncil on Oceans. With a degree in psychology and a masters in Intercultural Relations, Céline is fluent in three languages.