When it was released in 1987, The Monster Squad was deemed a 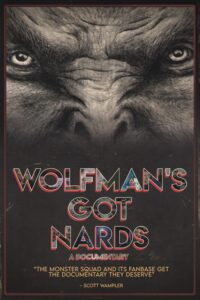 failure by critics and was, according to the box office, a film no one cared about. But over the last three decades, word of mouth has turned this sleeping hit into a cultural phenomenon. WOLFMAN’S GOT NARDS explores the relationship a dedicated audience (including celebrities and filmmakers) has with The Monster Squad. The film takes an in-depth look into the film’s conception, response,

cult status, and revival. Through interviews with the cast, crew, screenwriters, directors, academics and original reviewers as well as through never-before-seen footage, it turns the lens on an audience of self-proclaimed misfits who have kept The Monster Squad alive for more than 30 years. Director Andre Gower and Monster Squad member, Sean, joins us for a lively conversation on the unlikely saga of a box-office bomb that, like the squad, refuses to give up, and a community of fans that continues to grow.

About the filmmaker – Director André Gower has 40 years of experience in the entertainment industry, making him one of the most recognizable child stars of his generation. His body of work includes network series, movies of the week, and features. He is best known for playing the lead character in the cult classic The Monster Squad. Currently, André heads Fitterpiper Entertainment, a production company focusing on young independent filmmakers, new concepts from industry veterans, experimental digital concepts and short films with a roster of production professionals. He also co-hosts the short film series ‘Short Ends’ (Nerdist/ALPHA) and a podcast, ‘Squadcast with Ryan and André.

“Wolfman’s Got Nards is a well-made documentary that does right by The Monster Squad.” – Danielle Solzman, Solzy at the Movies

“There’s so much to cover, and Gower and his crew do an astounding job of being as thorough as possible.” – Kyle Anderson, Nerdist

“Watching these films – and this documentary – generates the type of joy we only felt as kids, as well as evoking the warm fuzzy feeling that nostalgia brings.” – Katie Driscoll, Starburst

“As a whole, I cannot recommend Wolfman’s Got Nards enough for those who love The Monster Squad, for fans of the horror genre, or even for anyone who has ever felt misunderstood by the world at large.” – Heather Wixson, Daily Dead