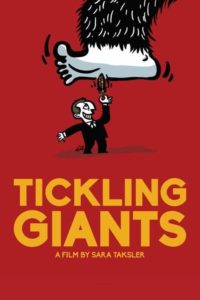 TICKLING GIANTS is a great story about the power of political satire in the face of oppression. In the midst of the Egyptian Arab Spring, Bassem Youssef makes a decision that’s every mother’s worst nightmare… He leaves his job as a heart surgeon to become a full-time comedian. Dubbed, “The Egyptian Jon Stewart,” Bassem creates the satirical show, Al Bernameg. The weekly program quickly becomes the most viewed television program in the Middle East, with 30 million viewers per episode. The Daily Show with Jon Stewart averaged two million viewers. In a country where free speech is not settled law, Bassem’s show becomes as controversial as it popular. He and his staff must endure physical threats, protests, and legal action, all because of jokes. As Bassem attempts to remain on the air, keep his staff safe, and not get arrested, he continues to let those in power know they’re being held accountable. Despite increasing danger, the team at Al Bernameg employ comedy, not violence, to comment on hypocrisy in media, politics, and religion. Directed by Sara Taksler TICKLING GIANTS follows the team of Al Bernameg as they discover democracy is not easily won. The young women and men working on Bassem’s show are fearless revolutionaries, who just happen to be really, really funny. The subject of Tickling Giants, Bassem Youssef joins us for a conversation on the cost and consequences of speaking out.

For news and updates go to: ticklinggiants.com

“Tickling Giants surprises us on several levels. It reveals Egypt’s familiar Arab Spring experience through a lens, that of satiric comedy, which is very different from the way we usually see it. And it has the personal element of Youssef’s involving story.” – Kenneth Turan, Los Angeles Times

“Mostly, the movie makes you understand how every society – and ours more than ever – needs people like Bassem Youssef to demonstrate that laughter will always be one of the essential ways to keep power in check.” – Owen Gleiberman, Variety

“There’s a lot to laugh at, and to learn from, in “Tickling Giants,” a documentary that starts off by telling the story of one man and ends up speaking volumes about satire, freedom of expression and political pressure.” – Ken Jaworoski, New York Times

“Media are their own giant, they shape beliefs and create community, instill hope and fear. Perhaps it’s a lesson that will be taken seriously by viewers in the US.” – Cynthia Fuchs, PopMatters