WRESTLE takes us inside the lives of four members of the high school wrestling team at Huntsville’s J.O. Johnson High School, a longstanding entry on Alabama’s list of failing 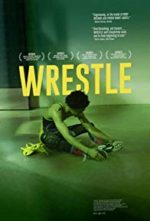 schools. Teammates Jailen, Jamario, Teague, and Jaquan face challenges far beyond a shot at the state championship: splintered families, drug use, teenage pregnancy, mental health struggles, and run-ins with the law threaten to derail their athletic success and lock doors that might open their future. Their tough-love coach Chris Scribner isn’t off the hook, either; he must come to terms with his own past while unwittingly wading into the complexities of race, class and privilege. Director Suzannah Herbert and co-director Lauren Belfer captured over 650 hours of footage during the team’s final season to create this closely observed, deeply affecting depiction of growing up disadvantaged in America. Wrestle premieres on Independent Lens Monday, May 20, 10:00-11:30 PM ET (check local listings) on PBS and will also be available simultaneously for online streaming at pbs.org.

For news and updates go to: wrestlefilm.com

For more about Independent Lens and Wrestle schedule go to: independentlens

Suzannah Herbert (Director/Writer/Producer), originally from Memphis, Tennessee, is a documentary filmmaker. Her NYU Tisch senior thesis, Home Game, premiered at DOC NYC. Herbert was the associate producer on Free Angela & All Political Prisoners, directed by Shola Lynch, and has since worked as an assistant editor on Michael Moore’s Where to Invade Next and Fahrenheit 11/9, and Martin Scorsese’s upcoming documentary, Rolling Thunder Revue, about Bob Dylan’s pivotal 1975 tour. Herbert made her feature

directorial debut with Wrestle, which won 11 awards on the 2018 festival circuit, and was distributed theatrically by Oscilloscope in 2019.

“Wrestle will completely suck you in from beginning to end. It’s is a heartbreaking, yet honest look at the more poverty-torn cities in our country.” – Dante Jones, Film Threat

“Sometimes hopeful, other times heartbreaking, Wrestle is an honest portrait of disadvantaged American youth that will inspire empathy and leave viewers with lots to ponder.” Kieran Fisher, Nonfics

“One reason “Wrestle” is so effective is that director Herbert and cinematographer Sinisa Kukic made the decision to move to Huntsville for the duration of the shoot.” – Kenneth Turan, Los Angeles Times