WE ARE MANY focuses on February 15th, 2003, when up to 30 million people, many of whom had never demonstrated before in 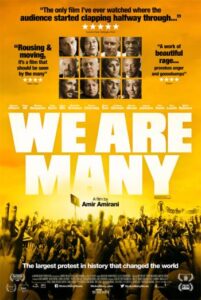 their lives, came out in nearly 800 cities around the world to protest against the impending Iraq War. The New York Times called this movement the “Second Superpower”. How did this day come about? Who organized it? And was it, as many people claimed, a total failure? This fearless, thought-provoking documentary is the remarkable inside story behind the first ever global demonstration and its surprising and unreported legacy. WE ARE MANY features testimony from a unique cast of direct participants, including organizers, activists, high-profile figures, and of course the public, filmed in seven countries – Italy, Spain, Egypt, Sweden, Australia, UK, and the USA. Extraordinary testimony from activists in Egypt reveals how, on the eve of the invasion of Iraq, the global anti-war protests inspired those in Tahrir Square to go on to engage in

the massive democratic movement that ultimately led to the Arab Spring. In the UK, the government was defeated over the proposed invasion of Syria, a historic event that might not have transpired without the legacy of those demonstrations a decade ago. The star-studded list of contributors includes Danny Glover, actor Mark Rylance, film director Ken Loach, Prof. Noam Chomsky, musicians Brian Eno and Damon Albarn, writer and Vietnam Vet Ron Kovic (author of ‘Born on the 4th of July’), Rev. Jesse Jackson, Richard Branson, and Colin Powell’s former Chief of Staff Col. Lawrence Wilkerson, amongst others. WE ARE MANY is a bold documentary by Amir Amirani charts the birth and growth of the new people power movement, now sweeping the world, taking us up to the Arab Spring and Syria, a little over 10 years after that historic day.

For news, screenings and updates go to: wearemany.com

About the filmmaker – Amir Amirani is a film-maker with a strong track record of work for some of the most respected series of the BBC. He has a degree in Biology from Nottingham University, and an M.Phil in International Relations from Cambridge University. Amir joined the BBC in 1992 and took up a Graduate Production Traineeship. In 1994, Amir and his brother Taghi established Amirani Films to produce documentaries for the major UK broadcasters, the BBC, Channel 4, PBS, and other international broadcasters. Amir has made films for a several of the BBC’s flagship series, including the multi BAFTA award winning Arena, Timewatch, Picture This, Correspondent and Newsnight, for which he was nominated for an Amnesty International Award. A film he directed in South Africa was nominated for the One World Broadcasting Trust Awards. Amir also works in radio, where he has produced programmes for leading series on BBC Radio 4, such as In Business, From Our Own Correspondent, The World Tonight, and single programmes such as From Tehran With Laughter. He has also directed British televisionís most popular soap opera. His journalism includes writing for the New Statesman, New Scientist,Business Traveller Asia and the Economist Intelligence Unit. His work has been well reviewed by the press.