female police chief Janeé Harteau, as she works to reform the Minneapolis Police Department by getting rid of bad cops, retraining the rest, diversifying the ranks and promoting women—who statistically use less force than their male counterparts—into every rank of leadership. WOMEN IN BLUE focuses on four women in Harteau’s department, each trying to redefine what it means to protect and serve. After a high-profile, officer-involved shooting forces Chief Harteau to resign, the new, male chief selects only men as his top brass. The women left 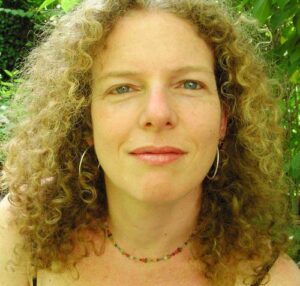 behind continue to fight to police differently and to rebuild community trust. WOMEN IN BLUE offers an unprecedented view into the inner workings of the MPD, chronicling a department—and a community—grappling with racism and a troubled history of police misconduct long before an MPD officer killed George Floyd in May

of 2020. The film reveals the limitations of police reform through incremental change and asks questions that apply well beyond the city of Minneapolis. Could increased gender equity and more women —especially Black women — contribute to greater public safety? Director Deirdre Fishel joins us to talk about some of the many reason that law enforcement is at a critical juncture, how women can be agents of reform in more effective but often aren’t allowed to and the impact that the Floyd murder had on the project.

About the filmmaker – Deirdre Fishel is a producer/director of documentaries and dramas that have premiered in competition at Sundance, SXSW, AFI and Full Frame and been broadcast in 35 countries worldwide.  Her most recent documentary  CARE, which looks at the poignant but hidden world of home elder care, was funded by ITVS and the Ford and MacArthur Foundations. It was broadcast on AMERICA REFRAMED and had an extensive impact campaign with support from Bertha BritDocs, AFI DOCS, and the Fledgling Fund. Fishel has devoted the majority of her career to stories about women and is Director of the BFA program in Film/Video at City College.  For more go to: newday.com/filmmaker/Fishel

“This is an unflinching study of a complex situation, showing gray areas where often only black and white are seen.” – Peter Keough, Boston Globe

“Plays like a spiritual prequel to everything we’ve seen in the past four weeks, and contains some early clues that there was something dreadfully wrong going on in the Minneapolis Police Department.” – Stephen Silver, Splice Today

“This is a timely, compelling look at a group of women who are dedicated to standing out in a male-dominated field.” – Mike McGranaghan, Aisle Seat