Filmed from inside two of the most active therapeutic feeding 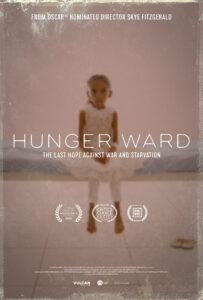 centers in Yemen, HUNGER WARD documents two female health care workers fighting to thwart the spread of starvation against the backdrop of a forgotten war. HUNGER WARD provides an unflinching portrait of Dr. Aida Al Sadeeq and Nurse Mekkia Mahdi as they try to save the lives of hunger-stricken children within a population on the brink of famine. HUNGER WARD is the third installment of Director Skye Fitzgerald’s Humanitarian Trilogy, focused on the global refugee crisis. The first film, 50 FEET FROM SYRIA focused on doctors working on the Syrian border and was Oscar® shortlisted. The second, LIFEBOAT documents search and rescue operations off the coast

of Libya and was nominated for an Academy Award® and national Emmy®. Director Skye Fitzgerald (Lifeboat, 50 Feet from Syria, Finding Face) joins us for a conversation on the making of his 2021 Oscar®

Shortlisted Hunger Ward documentary, how little American mass media has talked about the ongoing genocidal war against a defenseless civilian population – done with diplomatic,  political backing by the Trump Administration, as well as, intelligence and logistical support from the US military – and what we can do to stop it.

For news and updates go to: hungerward.org

About the filmmaker – Member of the Academy of Motion Picture Arts and Sciences (Documentary Branch). Oscar/Emmy/IDA-Nominated Director Skye Fitzgerald is directing The Humanitarian Trilogy: HUNGER WARD (2020) documents the impact of the war and famine in Yemen on children, families, and health care workers. LIFEBOAT (2018) highlights search and rescue operations off the coast of Libya and was nominated for an Academy Award® and national Emmy® award. 50 FEET FROM SYRIA (2015) focuses on doctors working on the Syrian border and was voted onto the Oscar® shortlist. Fitzgerald was also inducted as an honorary member into SAMS (Syrian American Medical Society) for his work with Syrian refugees and named a Distinguished Alumnus at his alma mater EOU for documentary work. As a Fulbright Research Scholar Fitzgerald directed the film Bombhunters and has since worked with the Sundance Institute, the U.S. Institute of Peace, the State Department, the Paul Robeson Fund and Mountainfilm. As a Director of Photography, Fitzgerald lenses work for major clients including Dateline, VICE, Mercy Corps, CNN, the Discovery, Travel, History and Animal Planet Channels. For more on Skye Fitzgerald go to: spinfilm.org

“Once you see it, you won’t forget it.” – Sarah Larson – THE NEW YORKER

“Fitzgerald has sought to harness this art-form to draw attention those who are struggling to obtain their most basic, fundamental human freedoms. LIFEBOAT…is vitally important.” – US HUMAN RIGHTS COMMISSION

“…deftly addresses the most critical humanitarian issue of our time and those who are doing something about it.” – Michael Brody – Programmer Crested Butte FF