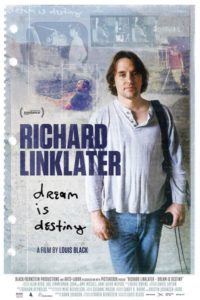 Richard Linklater: Dream is Destiny takes the viewer from the Academy Awards for the acclaimed, Boyhood, and an exclusive behind-the-scenes look at Linklater’s latest film, Everybody Wants Some. Throughout the film, Richard Linklater himself addresses his own life at mid-career point, at times while embarrassed and shy. He tells of the influential array of filmmakers, playwrights and criminals that continue to form his own independent work, and the philosophical modalities which have guided the path; all in conversation with Louis Black, an Austin-based journalist who has known him since the 1980’s. Other interviews include Ethan Hawke, Jack Black, Jonathan Demme, Matthew McConaughey, Sandra Adair and Julie Delpy, members of the Linklater family, Clark Walker and more. Richard Linklater: Dream is Destiny was produced for PBS’ American Masters series is an unusual look at a fiercely independent style of filmmaking that arose from Austin, Texas in the 1980s/ early 90’s.  It is an unconventional look at how Linklater’s films of that period, Slacker, Dazed and Confused and Before Sunrise, sparked a low budget, in your own backyard movement in this country and around the world. Co-directors and co-producers Louis Black and Karen Bernstein joins us for a spirited conversation on what makes Richard run, the early days of the Austin film scene and how Linklater has influenced and mentored many of the independent film world’s brightest talents.

For news and updates go to: linklaterdoc.com

“It’s shamelessly partial but also warmly pleasurable, partly because Mr. Linklater is an engaging and humble conversationalist who moves easily to the beat of his own soundtrack.” – Jeanette Catsoulis, New York Times

“A documentary portrait of the director of ‘Boyhood’ and ‘Dazed and Confused’ is full of revealing offscreen footage as well as a pinpoint feeling for the filmmaker’s visionary humanism.” – Owen Gleiberman, Variety

“Black and Bernstein understand what it is that makes Linklater so curious, and in chronicling his career in such a clear and entertaining way, they’ve put together a worthwhile and winning portrait of a very special filmmaker.” – Adam Chitwood, Collider