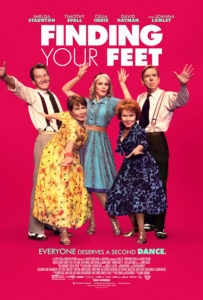 Maleficent, Vera Drake) discovers that her husband of forty years (John Sessions) is having an affair with her best friend (Josie Lawrence) she seeks refuge in London with her estranged, older sister Bif (Celia Imrie), The Best Exotic Marigold Hotel, Bridget Jones’ Baby). The two could not be more different – Sandra is a fish out of water

next to her outspoken, serial dating, free-spirited sibling. But different is just what Sandra needs at the moment, and she reluctantly lets Bif drag her along to a community dance class, where gradually she starts finding her feet and romance as she meets her sister’s friends, Charlie (Timothy Spall), Jackie (Joanna Lumley) and Ted (David Hayman). Director Richard Loncraine talks about his endearing and touching film about seconds chances and finding love.

For news and updates go to: findingyourfeetfilm.com/home

“The cinematic equivalent of a pair of comfy slippers. This is a charming, oft-told tale of second chances in life and love, and it is filled with fine performances only let down occasionally by an indulgent run time and some stunted dialogue.” – Linda Maric, HeyUGuys

“It’s about real adults living ordinary, important and sometimes difficult lives. Finding Your Feet is rightly billed as comedy-drama; yet, although it’s full of rib-tickling dialogue, it’s the drama that cuts deep.” – Stephen Romei, The Australian