This observational documentary follows a year in the lives of two inspirational teachers at Headfort, the only primary-age boarding school in Ireland. Housed in an 18th 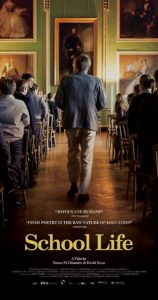 century estate, school life embraces tradition and modernity. For John, rock music is just another subject alongside Maths, Scripture and Latin, taught in a collaborative and often hilarious fashion. For his wife Amanda, the key to connecting with children is the book, and she uses all means to snare the young minds. For nearly half a century these two have shaped thousands of minds, but now the unthinkable looms: what would retirement mean? What will keep them young if they leave? Co-directors David Rane and Neasa Ni Chiandain stop by to talk about gaining the trust of a remarkably dedicated couple who have given their lives to the students and a way of life at Headfort and the joy of documenting an academic culture that celebrates and elevates young minds.

For news and updates go to: schoollifefilm.com

Opens in Los Angeles on Friday, September 15 at the Laemmle Monica Film Center

“‘School Life’ is as charming, intimate and warm-hearted an observational documentary as you’d ever want to see.”  – Kenneth Turan, Los Angeles Times

“The filmmakers demonstrate mastery of documentary style by achieving an extraordinary level of on-camera comfort with their subjects, intimate access where everyone seems unaware they are being filmed.” – Bradley Gibson, Film Threat

“It’s the kind of school that could never exist in today’s America: It’s too freewheeling, too unstructured. Maybe it won’t exist in Ireland much longer either, so it’s a good thing that School Life manages to capture its weird, wonderful world.” – Josh Modell, AV Club

“A celebration of the importance of teachers and putting faith into the next generation of kids, School Life is quite the pleasing little documentary.” – Alex Lines, Film Inquiry