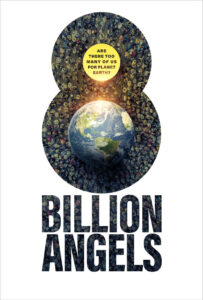 BILLION ANGELS focuses on how and why humanity’s demand for resources vastly are outpacing  nature’s ability to supply them.  Food, water, climate and extinction emergencies are unfolding before our eyes. 8 BILLION ANGELS tells the truth about the conflict between the size of our global population and the sustainability of our planet.  It dispels the misperceptions that technology can save us, that reducing consumption is the only answer, and that the blame lies solely in the developing world. 8 BILLION ANGELS enlists a wide array of experts that include; Jason Hall-Spencer, Dr, Saroj Pachauri, David Montgomery, Bill Stowe, Dr. Shashi Tharoor, Stuart Pimm, William Ryerson, Zoe Weil and Brownie Wilson to lay out how the world can achieve a sustainable balance for ourselves

and earth. Using breathtaking cinematography and startling emotion, the film takes the viewer on an immersive and emotional journey into the lives of farmers, fisherman and others as they witness an unfolding global crisis and inspires real solutions toward

lasting sustainability and a better quality of life for all Earth’s inhabitants. In 8 BILLION ANGELS Executive Producer and Executive Director of Earth Overshoot Terry Spahr joins us for a conversation on how and why facing the questions around the ever-expanding population of people is a vital and indispensable part of any plan to save humans from cataclysmic event.

For news and updates go to: 8billionangels.org

How to watch go to: 8billionangels.org/find-a-screening

Get active by going to: 8billionangels.org/take-action

Abramorama will host a national virtual premiere event screening on April 20 at 8 PM EST followed by a panel discussion on the inconvenient truths of overpopulation, to be followed by a nationwide Watch Now @ Home Cinema Release release on April 23, 2021.

About Earth Overshoot – Earth Overshoot is a 501(c)(3) organization dedicated to making ecological limits central to all personal and public decision-making through targeted education and advocacy. Its goal is to achieve a sustainable society characterized by human well-being and flourishing biodiversity. Launched in early 2019, the organization builds upon the key messages presented in 8 Billion Angels, a documentary feature about overpopulation as an overarching upstream cause of our global environmental emergencies. earthovershoot.org

Executive Producer’s Statement – In my lifetime I have witnessed remarkable changes in humanity’s growth, in prosperity, lifespan, and in sheer numbers across the globe. As a child in the 1970’s, I saw the unintended consequences of this growth near my home in Philadelphia where pollution clogged the same Delaware River so celebrated for Washington’s crossing, huge landfills for garbage fouled the landscape close to Independence Hall, and masses of cars produced smog-filled air as they navigated roads designed centuries ago for far fewer people. Despite awakening to our environmental pollution problem, giving rise to recycling, renewable energy, land conservation and environmental awareness and stewardship, we now see that no amount of technology, voluntary reduction in consumption, or conservation can halt the greater forces propelling us toward climate change, ocean acidification, deforestation and a host of other natural catastrophes. All of our efforts, up until now, have amounted to stop-gap measures that distract us from the fact that we add 80 million more people every year to the earth, who together consume more resources faster than the world can replenish, and emit more waste than the earth can naturally absorb. That is why I decided to stop talking about it and do something, dedicating my time and money to telling the truth about the problem, and sharing the hope of real solutions in the stories of everyday people. After all, it is only when we are not afraid to name a problem, confront it and talk openly and honestly about it, that we can begin to fix it. It is critical to offer an alternate vision for the future. If we, as individuals, families and nations, band together by pursuing smaller families, supporting the worldwide adoption of accessible and affordable family planning, and strengthening our global commitment to the education and empowerment of women and girls, we will not only bring tremendous social justice, economic prosperity and health equity to billions, but we will unequivocally restore the environment. Join me in on this first step of my mission to ensure a planet that provides a just, safe and sustainable future for everyone. – Terry Spahr

“A no-nonsense look at how our greed is the thing that will kill us and the planet… Persuasive and important, startling and familiar.” – Anne Brodie, What She Said